The Pedherney family from Westport were excited to win $500 on the Lions July 2nd cash calendar draw. The money went towards three new bikes. From left to right are Oscar, Jason, Zeke, Greta, Crystal, Alice and Theo Pedherney.   The family got a head start on next year’s draw by purchasing 2019 calendar.

Our general meeting on June 27th was not as exciting as seeing Bob O’Connell receive the news that he won $1500 but we did accomplish a lot. At this meeting Lions Wayne Bent and Jim McGlade reported on our recent Lions steak barbeque. This very successful event received many positive comments and a record profit was made. A special thank you was given to Harry Beckett for shuttling people back and forth from the fish hatchery. It was noted that if our numbers increase for this event, then we would have to do something about parking.

A schedule was drawn up to assist Lion Don Baker with maintaining the beach property. Lions Bob Reddick, Michael Harris, Harry Beckett, and Jim McGlade agreed to clean the washrooms/change rooms, pick up garbage and collect seaweed if needed. Harry Beckett volunteered to cut the grass on a weekly basis with Bob Reddick and Jim McGlade doing the trimming.   Lions Dorothy Maynard and Wayne Bent agreed to help Don Baker to clean the clubhouse. Jim Scala and David Blair are alternative tractor drivers when needed.

Rick Warriner, chairperson of the fish fry, reported that 222 dinners were sold with 45 take-outs. Rick was so encouraged by the results that he booked next year’s event for June 22, 2019.

Because of the tremendous support we have received from our community the membership decided that we should show our thankfulness with an Appreciation Day next July 20, 2019. A motion was passed to set aside sufficient funds to hire a couple of bands for this event.

Lions Don Baker, Wayne Bent, Harry Beckett and Heather Huth volunteered to put on a CPHC barbecue luncheon for local seniors on July 12th. These luncheons provide a chance for seniors to enjoy each others’ company and gives the Lion volunteers a positive experience. A special thank you to Jeannette Harper for helping with all food related events, and for taking pictures and uploading them to Facebook.

The meeting was capped off with Lions Don Baker and Jim McGlade receiving the Centennial Membership Award given to members who are instrumental in recruiting and retaining new Lions.

Congratulations to Bob O’Connell and Wayne Mulville our Spring Draw winners. Lion Bill Garland did an outstanding job organizing and motivating members to sell tickets. A new record was established for the number of tickets sold. Also, thanks to the membership who sold the tickets, especially during the heat wave, and the many people that supported this fundraiser to maintain our property.

On June 29th, thirty Lions, including guests, enjoyed the Buddy Holly Story at the Gananoque Playhouse. Everyone had such a good time we plan on attending The Canadian on August 10th, a play about a small town waterfront resort going bankrupt.

Congratulations to Sam Hoelke who received the Westport Lions Award at Rideau District High School’s recent graduation ceremony. This award is presented to a graduate who best displays a positive attitude, and who has shown great improvement through determination and hard work. Sam will study environmental science and engineering in the fall. We wish him success in his studies. 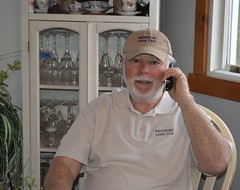 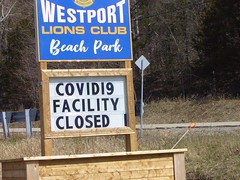 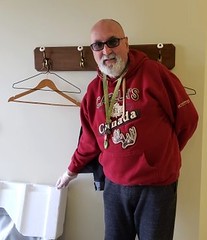