After wrapping up a successful year in 2012 which included their 60th Charter Night celebrations, the Westport Lions Club is not resting on its laurels but are planning for the coming year as they enter 2013. The Santa Claus Parade last year was one of the most successful every held and Santa endeared himself to everyone, as he visited local Day Care, North Crosby Hall and individual little friends as well as greeting everyone at St. Edward School following the Parade.

So far, the Club has made two very worthwhile financial donations to the youth of the area. The Rideau Sewing Club under the direction of leader Judy Pattinson, received a cheque for $250. to help purchase material and supplies as they make quilts for Palliative Care and cancer patients at the Perth and Smiths Falls District Hospitals. Also, they have made attractive pillowcases for the Children’s Hospital of Eastern Ontario (C.H.E.O.). “These are all done on a volunteer basis,” said Pattinson, “and these pillow cases help make a frightening stay at the Institutions a little easier for these younger patients”. The money was given by the Lions from their summer Bingos and were presented by Lions Bob Weir, Club treasurer to Pattinson and Rachel Knapp of North Leeds minor hockey who received $750.

The Club heard a positive report from Lion Jim McGlade, showing the fundraiser, selling Lions Cash calendars a great success and it is hoped to make this effort for 2013, equally worthwhile.

The Club heard a presentation by Jeff Rice on the Club’s various insurance policies and an informative question and answer period followed.

Lions John Rempel and Bob Weir report that the Lions Mobility Van is extremely busy and they make a plea for more volunteer drivers to keep the Van on the road. This service is filling a great need in the community but the absence of Lion Bob Weir for a few weeks off due to health problems the extra assistance would be much appreciated by the Club who sponsor it and also by community members who benefit from its’ service. 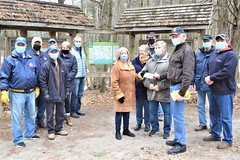 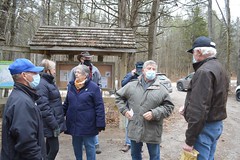 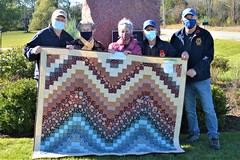 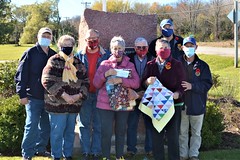